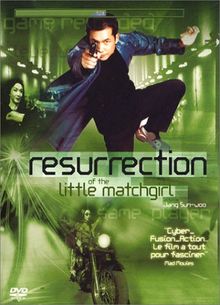 RESURRECTION OF THE LITTLE MATCH GIRL

Ju delivers food orders for a Chinese restaurant and squanders his spare time in game arcades. Game-based fantasies colour his everyday thoughts. It’s no surprise when he’s suckered into playing the virtual-reality game Resurrection of the Little Match Girl, in which the object is to save Hans Christian Andersen‘s forlorn heroine from sexual and other predators. He has to match his gaming skills with other opponents, including Lara, a transsexual hit woman and her boyfriend Lee, who has been hired by the Orwellian game control. Ju has hardly entered play when he’s stripped of his identity and powers. Meanwhile the Match Girl herself goes renegade and start taking her defense into her own hands.

Not only the most expensive movie ever made, Resurrection of the Little Match Girl is also the first film to see the supposed seductions of alternative realities in Taoist terms. Director Sun-woo Jang, maker of Lies and Timeless, Bottemless Bad Movie has given his movie a grungy look, stuffing it with spectacular action scenes, choreographed by Hong Kong specialists Daniel Yu and Raymond Fung. It’s also animated by inspired casting, with China’s most celebrated transsexual, Jin Xing, as Lara, the tetchy Kay-nam Myung (Oasis) as the game’s creator and French actor Pierre Rissient as the oppressive eyes and voice of The System.