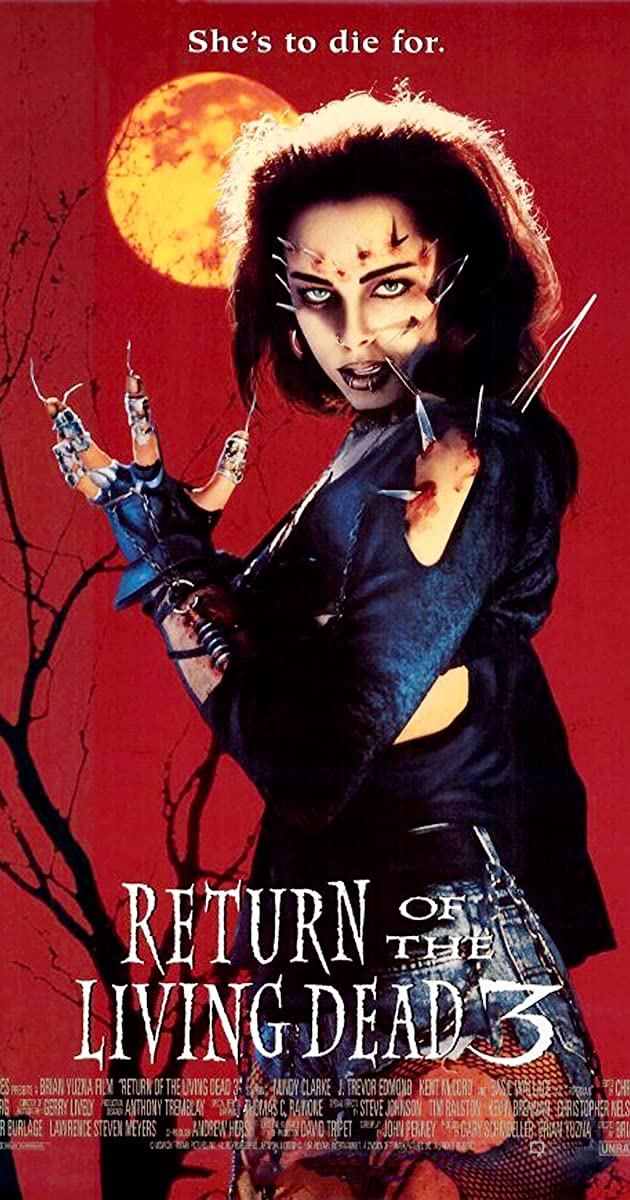 RETURN OF THE LIVING DEAD 3: ASHES TO ASHES

Curt and Julie are two lovers on the run. When they have a motorbike accident and Julie doesn’t survive, a desperate Curt drags her to a secret army base, where his father, a tough military man, conducts experiments on our friends, the living dead. The humanitarian intent behind this is to turn them into deadly bioweapons. Curt administers the life-enhancing liquid to Julie, unaware of the disgusting side-effects of the stuff. This soon becomes clear when the resurrected Julie develops a burning desire for a juicy piece of human flesh. The only thing that can stop the hunger is pain, so that after a while she starts to look like Pinhead’s sister. Curt, not wanting to forsake his love, flees with her. However, they are not only pursued by a vengeful youth gang, where Julie had briefly sunk her teeth, but also by the unscrupulous Colonel Sinclair, who has side-lined Curt’s father. She wants to capture Julie for further experimentation. It seems only a matter of time before hunger will prevail over pain, and Julie will turn on Curt.

This third Living Dead is without a doubt the best of the three. Brian Yuzna, who has already gained a reputation for innovative horror films such as Re-Animator, From Beyond, and Necronomicon, taps into new sources in the zombie genre with this tragic horror love story. Julie is a unique creation, the deadly beautiful undead, for whom one can feel both sympathy, fascination and (for the body piercers among us) inspiration. Mindy Clarke (Young Goodman Brown, Under the Collar) is a fatally fierce Julie. Trevor Edmond (For Keeps, Fatal Charm) plays her desperately sweet Curt. And Kent McCord (Predator II, Airplane II) is Curt’s dad, struggling with parental communication issues. The special effects are by Oscar winner Steve Johnson (The Abyss, Batman Returns, Freddy IV, …). Simply highly recommended!