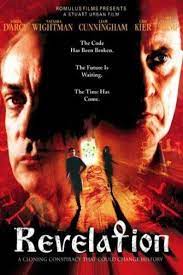 For two thousand years, the forces of light and darkness have fought over a relic that holds devastating knowledge. To understand the relic, the ancient arts of sacred geometry, astrology and alchemy must be combined with modern cyber skills and cryptography. Now, after having been missing for centuries, the sacred artefact turns up in the back of a camper van. Billionaire Magnus Martel is desperate to find and destroy the relic before a powerful secret society, who wants to abuse its knowledge, gets hold of it. He’s reluctantly aided by his estranged son Jake, a computer decoding expert, and Mira, a student of alchemy. His opponent, the Grand Master, is a demonic sentinel who has stalked the ages since witnessing Christ’s crucifixion. The hunt for the relic will takes them from Britain to France, Malta and Greece. The outcome will decide the fate of humanity. The supernatural thriller Revelation is an astounding adventure into the metaphysical. Director Stuart Urban (Preaching to the Perverted) comes from the BBC, where he worked as a scriptwriter, producer and director on series such as An Ungentlemanly Act and Our Friends in the North and Against the War. Urban expertly blends together arcane myths, the occult, the Knights Templar, genetic engineering and cyber technology. This fantastic voyage into provocative and compelling religious territory has the added attractions of veteran actors like Terence Stamp (Priscilla, Queen of the Desert, The Limey), Udo Kier (My Own Private Idaho, Breaking the Waves, The Kingdom I & II) and Derek Jacobi (I, Claudius).