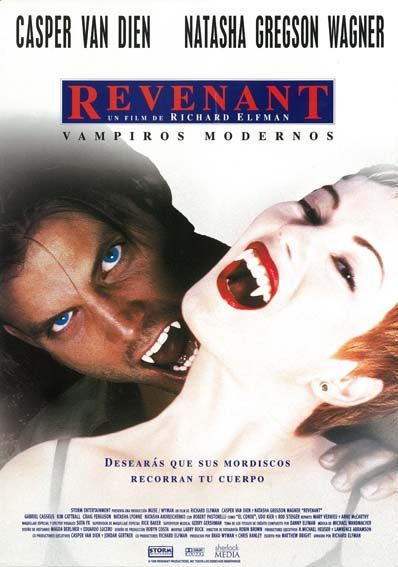 Nico, a gorgeous teenage hooker, walks a dark, mostly deserted Hollywood street carrying a half empty soda bottle. Her scanty outfit is worn and dirty, her hair wildly unkempt. A sleek Jag pulls up, Nico hops in, turns the radio to heavy metal and seems to “rock out” in a deep reverie. The driver parks in the adjacent hills, asks in a British accent: don’t you want to talk money? You ain’t gonna rip me off, she says, pulling her top up, hiking her mini skirt back then straddling the man. Awfully sure of yourself, he muses. Nico smiles, revealing tiny fangs and gums that seem unnaturally red against the whiteness of her skin. The sight of Nico up close causes the trick to become concerned for his health: Uhh, I think perhaps a condom would be in order here… Nico suddenly smashes her bottle, slashes his throat and starts sucking blood.
Revenant is meant to be fun, sexy and utterly outrageous. It is also a sublimely nuanced satire of values, race and culture with an absurd and sometimes comic / poignant juxtaposition of quirky yet multidimensional characters. Richard Elfman (Forbidden Zone, Streets of Rage, Shrunken Heads) directed this hot and steamy erotic vampire movie. Natasha Gregson Wagner (Lost Highway, Glam, Buffy, The Vampire Slayer) stars as Nico, a bloodsucking seductress gaining notoriety as the “Hollywood Slasher.”