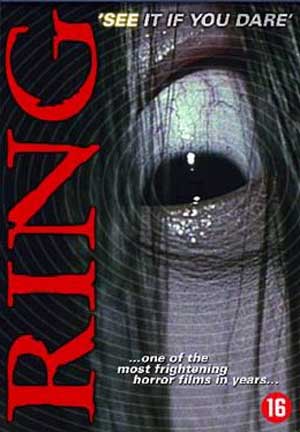 With disturbing synchronicity a couple of boys and girls die within the same hour. Tv reporter Reiko Asakawa smells a scoop. During her investigation, she finds a videotape that was seen by all the victims. The video contains an ominous message that anyone who will see the tape, will die within a week. Together with her ex-husband, Ryuji Takayama, Reiko starts to search for the maker of the tape. And they’d better find him fast. Reiko’s son has also seen the video and he finds himself together with his mother on the list of future victims of the mysterious video.
Hideo Nakata’s Ring reminds you of Alejandro Amenabar’s Tesis and even a bit of David Cronenberg’s Videodrome. But it distinguishes itself from its illustrious predecessors by its ultra-graphic direction. Ring is a fantasy thriller with a tense atmosphere in which Nakata shows us an unfamiliar side of Japan : dark, violent and frightening. His movie will take you in its spell and will not release you until the shocking end