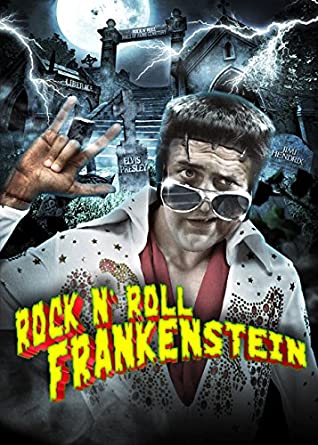 Bernie Stein, a washed-up music agent needs a new star. His nephew Frankie has developed a rejuvenation process that can reanimate lifeless body parts. Now Bernie wants to create a superstar by assembling the organs of rock ‘n roll’s dead elite. He partners Frankie with Iggy, a burnt-out roadie, to assist in acquiring the legendary body parts. The plan proceeds smoothly until Iggy screws up big time. Instead of pilfering Jim Morrison’s genitalia, he swipes Liberace’s. The monster is brought to life and his mentors start him on the road to rock ‘n roll glory. But problems arise when the Liberace side of the monster tries to assert itself. A schizo relationship starts to develop between the monster and his privates. And sure enough, people have to die. Brian O’Hara’s Rock ‘N Roll Frankenstein boldly goes where bad taste has rarely gone before. Brian learned the tricks of the trade by editing porn movies and worked his way up to low budget exploitation flicks. Frustrated and disappointed with the trials and tribulations of his first film, he made a desperate move by adapting his most extreme script to the screen. The result is a frontal assault on the politically correct powers that be. Homosexuality, Catholicism, bestiality and necrophilia are used in such perverse ways that the tolerance level of its viewers is tested to the limits. With campy and outrageous acting and effects, Rock ‘N Roll Frankenstein is no-holds barred silly entertainment that should be seen at one’s own risk.