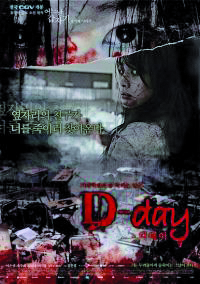 Four girls, Yoo-jin, Eun-soo, Bo-ram and Da-young become roommates in a boarding academy nestled away in a remote section of Korea, where strict discipline is used to prepare students for their upcoming college entrance exams. It’s difficult for them to adapt to the stifling atmosphere of the institute and to get along with each other due to their differing personalities. It also doesn’t help that the principal is a cold-hearted bitch. Yoo-jin has the most difficulty with the stuffy institute life and it seems as if all the teachers are out to get her. She begins to have visions of events that took place at the institute in the past, like the tragic fire that occurred years ago. Yoo-jin gradually becomes consumed with fear, and the relationship among the four intimate friends begins to suffer from it. D-Day is a horror film which doesn’t really need ghosts. Director Eun-kyung Kim decided to structure her film around drama rather than gore or technique. The film’s emotional kick emerges from its claustrophobic setting, and the young actresses keep us glued to the story as it unfolds. What distinguishes D-Day from other Asian horror films is the consistency of its vision. These awkward-looking girls in sweat pants will definitely scare you more than any long-haired ghost draped in white.