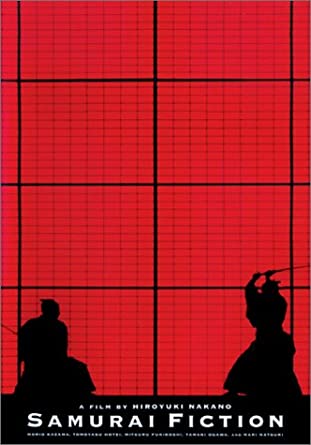 Tree hundred years ago, Japan was ruled by the shogun. When the ruler’s sword gets stolen, he orders the young samurai Heishiro to retrieve it. On his journey, Heishiro will encounter some remarkable characters, among which a cunning feudal lord, his naive son, an old ninja and his disciples, the master warrior Ronin, a samurai who believes in non-violence, and his innocent yet bright daughter.
Samurai Fiction is a not-so-typical samurai movie. Director Nakano incorporates versatile camera work and adds an innovative style to this popular genre. His film is a tribute to the legendary director Akira Kurosawa. Nakano faithfully revives Kurosawa’s style through the composition of the black-and-white scenes and the sword-fighting duels. Samurai Fiction is a faithful introduction for those unfamiliar with the genre and a funny “find the hidden picture” quest for the initiated.