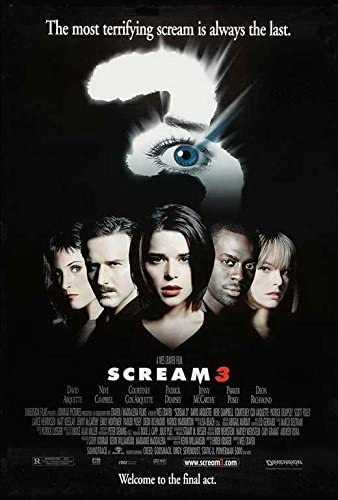 After the frightening events that occurred around Windsor College, Sidney is now trying to keep a low profile as she moves to Hollywood desperately trying to make a career in the film industry. In the hope of working her way up, Sidney takes a job on the set of Stab 3: Return to Woodsboro. The cast and crew of the film start being killed off one by one and soon enough Sidney receives a chilling phone call while on the job. She discovers the new killer could be connected to Woodsboro. Gale Weathers is now a top-notch reporter with her own talk show. After hearing about the murders surrounding the latest installment of the “Stab” series, Gale decides to report on the set, alongside her husband Dewey. Sidney meets up with them and soon they are desperately trying to protect the cast of the film as well as themselves. Chapter one set the rules. Chapter two bended the rules. But in the finale, there are no rules ! Scream 3 is a very satisfying and surprising end to the celebrated trilogy by director Wes Craven and screenwriter Kevin Williamson. Neve Campbell (Wild Things, The Craft, Studio 54) stars once again as Sidney Prescott, assisted by Courteney Cox (Tv’s Friends, Ace Ventura : Pet Detective) and David Arquette (Never been kissed, Ravenous) as Gale Weathers and Dewey Riley. Lance Henriksen (Tv’s Millenium, Aliens) and Carrie Fisher (Star Wars) play John Milton and Virginia Grey, the unfortunate producers of Stab 3.