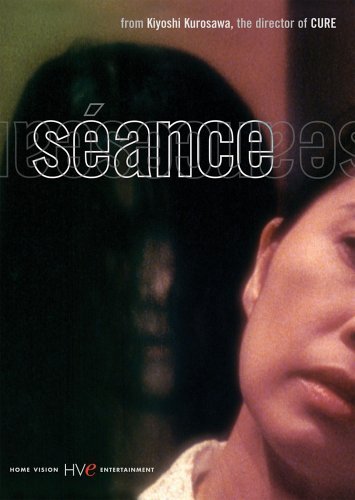 Junco is married to sound effects technician Katsuhiko. She works out of their home as a kind of spiritual advisor, mostly assisting people in need. One day, a girl is kidnapped in strange circumstances. Hayakawa, a graduate student in psychology who’s developing a theory of paranormal communication, invites Junco to join his study. Soon after, the police ask him to assist them in solving the kidnapping. When the girl manages to escape her captor, she coincidentally hides in Katsuhiko’s equipment case. Junco uses her powers to locate the girl and they bring her into the house to recover. Deciding the time has come for her to become a star of the spiritualist community, she prods Katsuhiko into creating an elaborate hoax to have the girl miraculously “found”. Kiyoshi Kurosawa is one of Japan’s most important filmmakers. His ability to manipulate worn-out generic forms into provocative and profound packages is turning heads worldwide. In recent years he has been confidently experimenting with narrative structures in films such as Cure, Barren Illusion and Charisma. They demonstrate his commitment to keeping cinema fresh and exciting. Séance, his latest, is a psychological thriller in which Kurosawa investigates the deep hubris of his spiritually enlightened protagonist. He elegantly questions the authority of the medium. Why do we always believe that someone communicating with the other world is either a complete charlatan or telling the absolute truth? Séance is a rip-snorting thriller full of fascinating twists