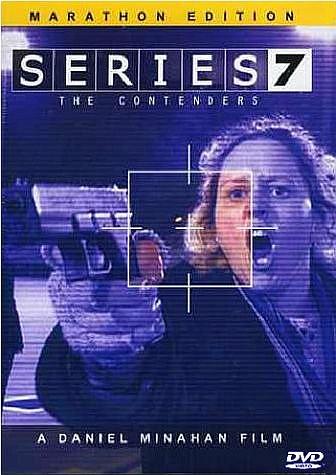 The Contenders : Series 7 is the ultimate in reality TV. Six contenders are chosen in a lottery to participate in a lethal game of cat and mouse. Armed with a gun and followed by a camera crew, each contestant must kill or be killed. The last one standing becomes the winner. Reigning champion Dawn Lagarto returns to her hometown after 15 years. She is eight months pregnant and will do anything to survive for the sake of her unborn child. There’s emergency room nurse Connie, who must now take lives in stead of saving them. 18 year old Lindsay has the full support of her loving parents. Franklin is a 72 year old lone gunman. The dark horse of the series is unemployed tough guy Tony. And finally there’s terminally ill Jeffrey, who also turns out to be Dawn’s ex-boyfriend. Will these star-crossed lovers reunite, or will they be forced to kill each other ? Stay tuned for the dramatic conclusion. Take the documentary style of The Blair Witch Project, the voyeurism of The Truman Show and the hazardous struggle of Survivor and you get The Contenders, the final consequence of the reality TV plague. Director- screenwriter Daniel Minahan, who co-wrote Mary Harron’s I Shot Andy Warhol, belongs to a new generation of filmmakers for whom the camera itself is the truth. But the camera can also be a killer. Series 7 conveys this message, reminiscent of films like Norman Jewison’s Rollerball and Paul Bartel’s Death Race 2000, with a very persuasive style indeed. Brooke Smith (Trees Lounge, The Man Who Wasn’t There) plays pregnant and determined Dawn and Glenn Fitzgerrald (The Ice Storm, Buffalo Soldiers) is old flame Jeffrey.