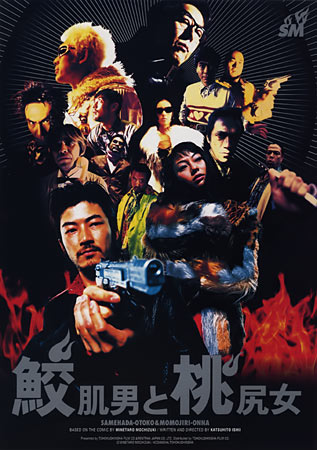 Against the background of a surreal mountain landscape, Toshiko, a young hotel clerk, races off in her car in an attempt to escape from her mad uncle Sonezaki. Suddenly she sees a man running through the woods in his underpants. She doesn’t notice the car that is chasing him until a collision is inevitable. The half-naked Samehada is being pursued by trigger-happy gangsters who want their stolen money back. Samehada takes the wheel from Toshiko, who is now unconscious, and races off. Uncle Sonazaki meanwhile hires Yamada, a nerdy surveillance snoop, to trace his missing niece. What follows is a series of increasingly bizarre and violent encounters, as Samehada and Toshiko travel through a comic, violent and tragic world filled with kinky sex, spectacular locations and flashy clothes. As a student at the Musashino Art University, Katsuhito Ishii became fascinated with American comics and films. His interest in the visual arts resulted in a short animation film, Wild World (1991). Since then he directed more than eighty commercials before making his feature film debut. In Shark Skin Man and Peach Hip Girl, a bloody gangster drama touched with sardonic wit, he exploits his undeniable visual talent and his predilection for the perverted to show a new angle on the Yakuza-genre. Samehada, the spoilt little gangster, is a part by Tadanobu Asano, a big star in Japan and not unknown in the West, having played in Hirokazu Koreeda’s Maborosi no Hikari and Sogo Ishii’s Labyrinth of Dreams.