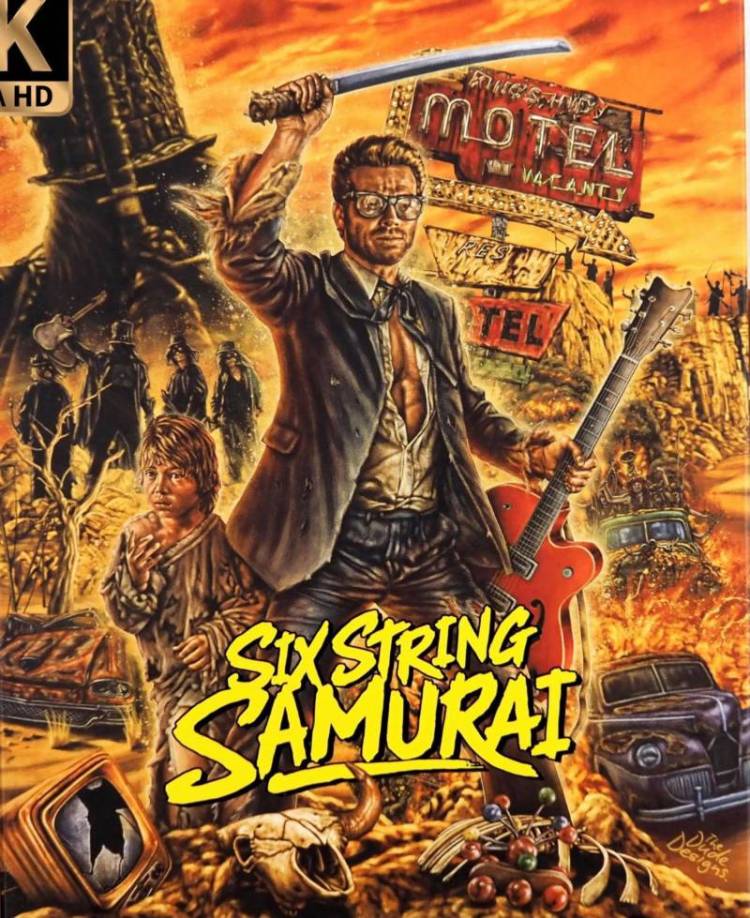 “In 1957 the bombs dropped and the Russians took over what was once America. The last bastion of freedom became a place called Lost Vegas, where Elvis was crowned King. But after forty rockin’ years, the King has died and the word is out : Vegas needs a new king. News of the now vacant throne spread quickly throughout the wastelands, attracting the attention of every guitar picking, sword swinging opportunist; including “Death” himself, vowing that Vegas shall fall and a new sound of darkness will fill the airwaves. He starts knocking off every would-be challenger that gets in his path, claiming their guitar picks like an Indian would claim scalps. A post-apocalyptic superhero in horn-rimmed glasses also follows that long blown out highway towards the mythological kingdom of Rock. Buddy, a mysterious and powerful hero of the classic kind, is as skilled with his guitar as he is with his samurai Sword. He’s a lone wolf rocker that’s all to willing to fill the King’s blue suede shoes. Thrown together with a bothersome kid whom he saves in a spectacular battle, Buddy and the kid form an unlikely team as they make their way across the wastelands, pursued by Death, hungry cannibals and the entire Russian army.
Six-String Samurai, a post-modern, post apocalyptic, Hong Kong action, klezmer rock ‘n roll Mad Max movie, was born when aspiring filmmaker Lance Mungia ran into actor and jack of all trades Jeff Falcon. Their twisted imagination came up with a super low budget indie flic, which they wanted to shoot in Death Valley, one of the hottest places on earth. After some torturous guerrilla filming they had blown away all their money and were left with just 25% of their film. Armed with a trailer and some flyers they managed to find the rest of the money at Robert Redford’s Sundance Film Festival. More exhausting shooting in Death Valley ensued, but the result was worth it. Six-String Samurai is wildly original and highly entertaining, a mixture of Akira Kurosawa with Elvis Presley, Tsui Hark with George Miller and John Woo with the Three Stooges. The music, something called “Siberian Surf Rock”, is taken care of by those Russian-born Rock & Roll surfers : the Red Elvises.”