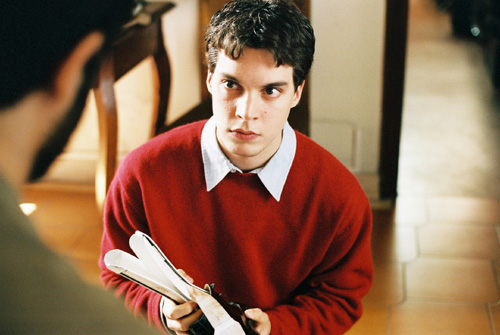 Don Antonio, the old parish priest of the small Umbrian town of Acquasparta, is found murdered. The young priest Carlo Baldi, who has just recovered from a serious mental breakdown, is sent to replace him. He finds out that Don Antonio was investigating the mysterious death of a child and soon becomes involved in his predecessor’s quest. Baldi gets help from Luca Anselmi, a young television journalist who‘s making a documentary in Acquasparta about an old, clairvoyant woman. They discover a terrible and forgotten news item about an event that occurred in the town in the seventies. Baldi and Anselmi start to construct a connection between the dead child and the visions of the now comatose clairvoyant.

After learning the ropes by directing the television series Caro Domani, Mariantonia Avati follows in the footsteps of her father, acclaimed Italian director Pupi Avati. Even though the budget of her debut feature didn’t allow grand visual follies (the film was shot in black and white), Avati has written a solid script for her frightening gothic tale, which can count on the acting talents of Patrizio La Bella (Le Sciamane) as Carlo Baldi and Lorenzo Balducci (El Alamein, Il Cuore Altrove, Knight’s Quest) as Luca Anselmi.