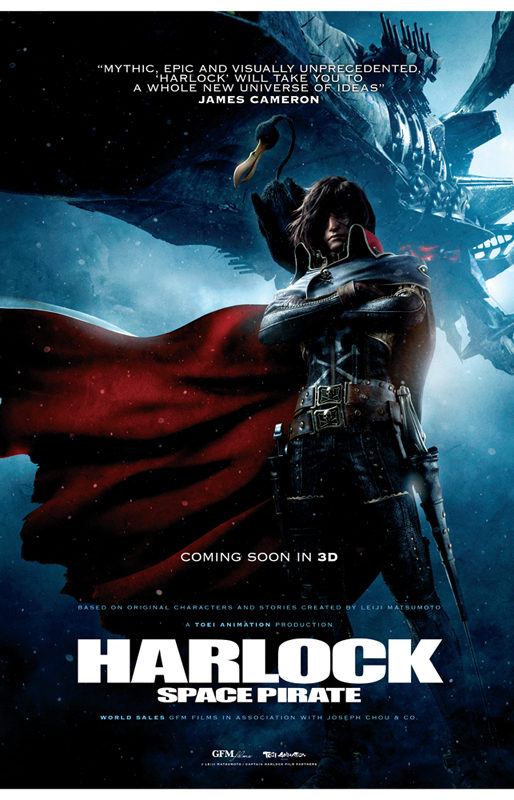 When overpopulation made the Earth uninhabitable, mankind decided to seek for a new home among the stars. They searched in vain and had to return to their old planet, only finding their way barred by the Gaia Coalition, an alien alliance that closed off the Earth from its former inhabitants. But one man resisted; the mysterious space pirate Captain Harlock. This merciless but honorable revolutionary can count on his battle cruiser Arcadia, the support of fierce warrior Kei and the council of the alien Mimay to conquer the Earth. Ezra, the military leader of the Alliance, orders his brother Logan to kill Harlock. He infiltrates the crew of the Arcadia, ready to make an end to the pirate’s life. But Logan becomes impressed by Harlock’s crusade and turns his back on Gaia. The web of lies spun around our planet starts to unravel. An epic battle will decide the fate of humanity. Finally we’ll be able to see the famous anime classic by Leiji Matsumoto (Galaxy Express 999, Space Battleship Yamato) on the big screen. Director Shinji Aramaki (Appleseed) had a budget of 30 million dollars to bring this epic space opera to live in all its glory. Not only the old, nostalgic for the series that colored their youth, will enjoy this. Their kids will also be impressed by this impressive piece of sci-fi animation that benefits from such a sense of detail that even James Cameron would approve.