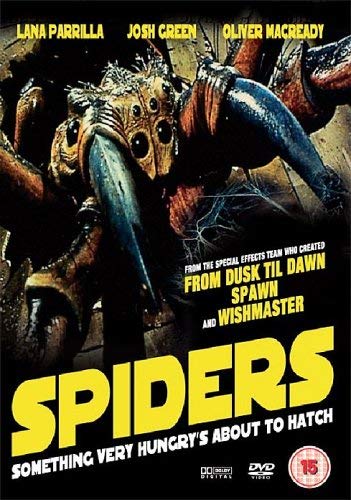 Just another routine day in space, or so it appears. Houston is counting down another space shuttle mission. They don’t know that their every move is being monitored by the Special Agency Men. This shuttle mission has a special guest onboard, a spider. When the crew injects the spider with a mysterious fluid, all hell breaks loose. The Special Agency team takes over control of the malfunctioning shuttle and tells the panicked crew to switch controls to the automatic pilot. They are unaware that they are being rerouted to Area 21, where people check in, but never check out. The first year of the new millennium sees a true wave of monster movies invading our screens. After giant octopuses, ants, crocodiles and other mutations terrorised the generation of our parents and grandparents, it’s now our turn to fall prey to the giant beasties. A good example of this new breed is Spiders, directed by Gary Jones (Mosquito, Tv’s Xena : Warrior Princess and Hercules : The Legendary Journeys). Co-writer Stephen Brooks is known to festival aficionados when he visited us with Tobe Hooper in 1995 to present their film The Mangler. The giant spiders were conceived and animated by the legendary KNB SFX-studio (Hellraiser, Army of Darkness, Night of the Living Dead III).