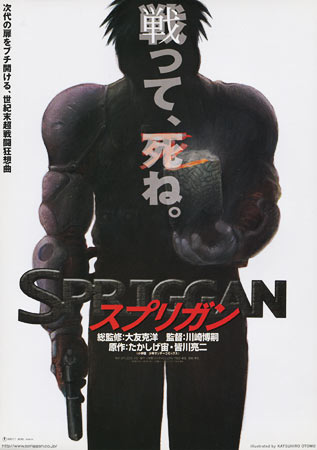 Noah’s Ark has been discovered, transmitting a very powerful and mysterious signal. Kept secret by the authorities, the ark soon becomes the object of thorough scientific investigation and bloody battles for its possession. Two forces clash with each other. The first, Arcam, is an international agency, formed by superagents with almost unlimited powers. One of its agents is Japanese, called Yu Ominae – code name Spriggan. Arcam’s opponent is an evil conglomerate, led by a mutant child who seems capable to communicate with the Ark and wants to uncover its secrets for evil means. Trying to thwart the plans of the mutant child, Yu is transported to a parallel dimension where space and time melt with each other. Brace yourselves. With Spriggan, an adaptation of the mega-selling manga Striker, director Hirotsugu Kawasaki and producer Katsuhiro Otomo have created one of the most spectacular science-fiction animation films you’ve ever seen. Otomo, the legendary creator of Akira and Memories and Kawasaki, a former assistant of Hayao Miyazaki (Porco Rosso, Princess Mononoke) and in charge of key animation for classics like Laputa, Akira and Ghost in the Shell, will certainly convert a new generation of filmgoers to the Anime genre. Their movie is a brilliant combination of the high tech sci-fi of Akira with the exciting adventure cinema of Spielberg’s Indiana Jones trilogy. With sharp, precise and incredibly realistic editing and breathtaking visuals, Spriggan represents a tour de force of Japanese animation.