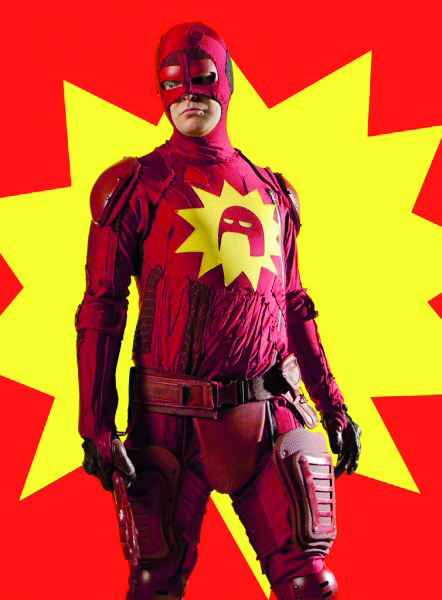 Frank D’Arbo, a deeply religious cook, watches in anguish how his stunningly beautiful wife Sarah leaves him for the slick drug dealing strip club owner Jacques. He sinks away in a deep depression in front of the television. In a feverish dream, he gets a message from God : “Thou shalt fight the scum of the Earth with thine wrench.”. A reborn Frank stitches a brightly colored spandex suit together and departs on a one-man crusade against petty thieves, pedophiles, junkies and each and every law breaking citizen he can hit with his wrench. His antics inspire cute comic-strip clerk Libby, who enthusiastically joins him as his sidekick Boltie. The two kick, fight and scratch their way to Frank’s ultimate goal : liberating Sarah from Jacques’ clutches. James Gunn, scriptwriter of Dawn of the Dead and director of Slither, must have been mad as hell when last year’s Kick-Ass started to… well, kick ass. Gunn had already been working for years on a movie about an ordinary guy with a superhero complex. But Super is anything but a copy of our 2010 closing film. The violence is a lot more extreme, the humor is grimmer and the story is more dramatic. His “Troma-roots” (Lloyd Kaufman has a cameo!) are also clearly visible in his style, a fusion between horror and satire. And the cast is to die for : Rainn Wilson (Galaxy Quest) as Frank aka Crimson Bolt, Lyv Tyler (Armaggedon, Lord of the Rings) as Sarah, Kevin Bacon (Tremors, Mystic River) as Jacques and Ellen Page (Hard Candy, Juno) as sidekick Boltie.