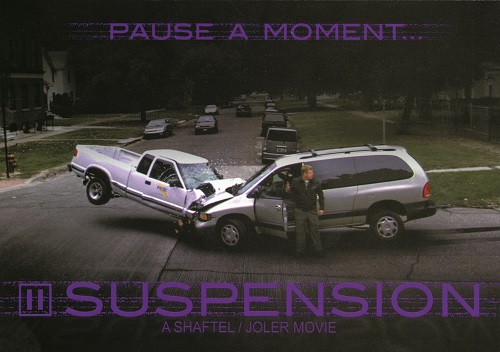 Daniel, a man nearing retirement, loses his wife and son in a car accident. Slowly recovering from his injuries, alone in an empty house, Daniel begins to rebuild his son’s old video camera that was damaged in the crash. Infused with power from the moment of the accident as well as Daniel’s overwhelming grief and desire to regain control, the camera develops the ability to stop time when Daniel presses the pause button. This discovery restores Daniel’s sense of purpose and he fills the vacuum in his life by taking responsibility for another victim, Sarah, a young schoolteacher who lost her husband in the same car crash. At first, he starts to change little things in her life. But Daniel underestimates the havoc he causes by stopping time. His power becomes an addiction and slowly, but surely, it starts to corrupt him. Suspension, by young debuting filmmakers Ethan Shaftel and Alec Joler, is a compelling fantastic tale about the corruptive nature of power and the dangers of an obsession with control. This low budget tour-de-force will amaze you with the sophistication of the time freezing effects and touch you with the intense portrayals of loss and longing by Scott Cordes as Daniel and Annie Tedesco as Sarah. The screenplay by Aris Blevins is tight and suspenseful, while the score, composed by Jed Whedon, brother of Buffy creator Joss Whedon, adds to the excitement and suspense.