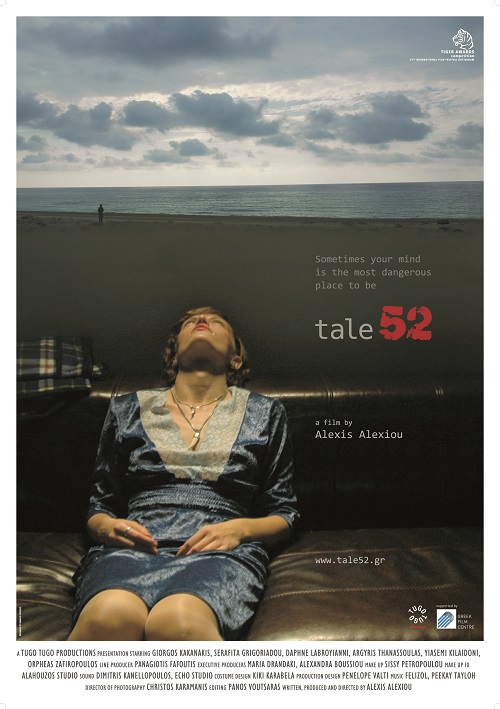 Iasonas meets Penelope at a dinner with mutual friends at his home. Everything begins here and everything will keep starting from here. They go out, they get to know each other, and at some point Penelope moves in. He can share everything with her. Even that childhood game of trying to control his dreams. Until one morning, when Iasonas wakes up to find that Penelope has disappeared. He doesn’t know where she has gone or why she left. He can’t remember what has happened. Are his chronic headaches to blame, or a secret that reaches out from the past and pulls him further and further away from reality ? Iasonas has to find a way to get his memory and his life back. But something keeps getting in the way. Is it the childhood game that has returned ? Is it some sort of psychological disorder that threatens him ? Or perhaps an inexplicable natural phenomenon, a time warp that pulls him in, deeper and deeper ? Groundhog Dag Meets David Lynch in Tale 52. Somewhere between the lines of a psychological drama and a fantasy thriller, it’s a bizarre tale about the end and the beginning of an affair. Director Alexis Alexiou has blown up his 16mm stock to 35mm to obtain a grainy look. He uses multiple shots from different angles to increase the sense of paranoia. Daylight is shut out entirely from Iasonas’ dingy, colourless apartment, almost the only location in the movie. Alexiou entirely forgoes a linear narrative to plunge us into a first hand experience of a surreal psychotic breakdown. Tale 52 is an elliptical mind bender that takes us on a trip to a truly dark and confusing world that would have made Philip K. Dick proud.