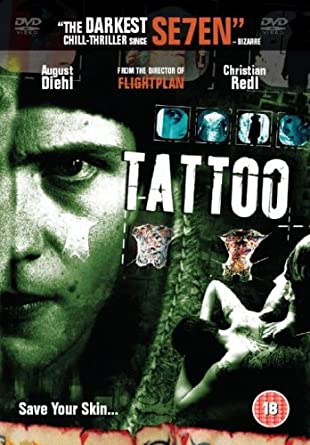 Marc, a recent graduate from the police academy, is caught at a rave with pills in his jacket. Inspector Minks, who led the raid, puts Marc to the choice. Either he works for him in homicide or his career is over. Soon enough, it becomes clear what Mink has in mind. He needs access to a world in which his daughter Marie disappeared into two years ago. Marc’s investigation leads him to the burnt corpse of a young woman and a series of murders, all of which have one thing in common. All the victims are missing large swaths of skin, cut off with a scalpel by the perpetrator. When Marc comes across Maya, the beautiful girlfriend of one of the victims, she too gets sucked into a maelstrom of terror, from which there seems to be no escape.

Set against the backdrop of the techno-club scene, Tattoo is an intense and daring thriller. With his carefully composed, mostly monochrome images, debut-director Robert Schwentke turns Tattoo into a psychologically direct and explicit walk on the wild side that literally gets under your skin. Starring August Diehl (Love : The Hard Way) as Marc, Christian Redl (Oskar and Leni) as Minks and Nadeshda Bernice (Kanak Attack) as Maya.