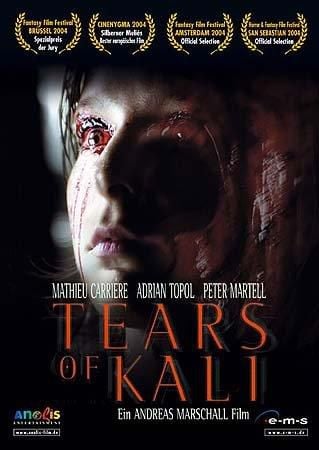 In the seventies, many westerners flocked to India to live in communes where they started to develop therapies to heal “the sickness of the western world”. The Taylor-Erikkson group was notorious for trying to redefine the limits of self-finding, sex and violence. Their experiments soon descended into pure horror. Three stories try to shed light on this mysterious group. In Shakti, a young woman wants to solve the murder of her therapist and comes across a mental patient who once was a member of the Taylor-Eriksson group. In Devi, skinhead Robin is sentenced to undergo therapeutic sessions with the famous Dr. Steiner. But the doctor uses extreme methods to cure his patients. In Kali a fraudulent healer, calling himself The Golden, is asked by a woman to take away a big pain that has burdened her for years. He sets free a eerie power.

In Tears of Kali, debut director Andreas Marschall exposes us to the dark side of the New Age. This shockfest in three parts shows that beyond the peaceful façade of spiritual soul searching lies a world of extreme transgressions and terror. With Mathieu Carrière (Benvenuta, A Woman Between Wolf and Dog, L’oeuvre en noir) and German scream queen Anja Gebel (Rigor Mortis, Sounds of Fear, Lord of the Undead).