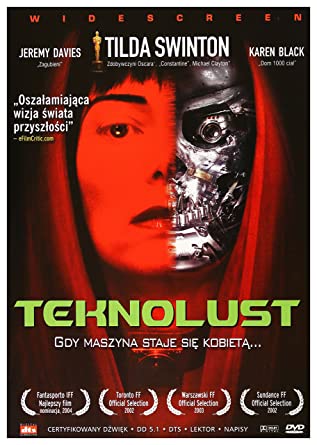 Rosetta Stone, a brilliant but bashful bio-geneticist, secretly downloads her own DNA into an Artificial Intelligence Program, creating three beautiful and amazing SRA’s, Self Replicating Automatoms. Part human, part software, Rosetta’s creations, Ruby, Marine and Olive, live in a color-coded, digitized environment, seemingly accessible only through Rosetta’s microwave. While Rosetta struggles with being too shy and timid for her own good, Ruby, Marine and Olive become increasingly independent and “alive”, driven by curiosity, intelligence and desire.

The vivid and imaginative movie Teknolust, directed and written by Lynn Hershman Leeson (Conceiving Ada), is a coming of age story, not only for the characters, but also of our society‘s relationship to technology. Leeson’s understanding of the far-reaching gender implications of her tale, makes for a wise rethinking of technology’s hazards. With Academy Award winner Hiro Narita (The Arrival) using the latest High-Definition 24P camera, Klaus Badelt (Gladiator, K-19 : The Widowmaker) on the soundtrack and the kind of dazzling art direction rarely seen on indie budgets, Teknolust is one hip cyber-fi movie. Tilda Swinton (Orlando, The Deep End) makes brilliant use of her multiplicity, whirling through the roles of Rosetta, Ruby, Marine and Olive with great gusto.