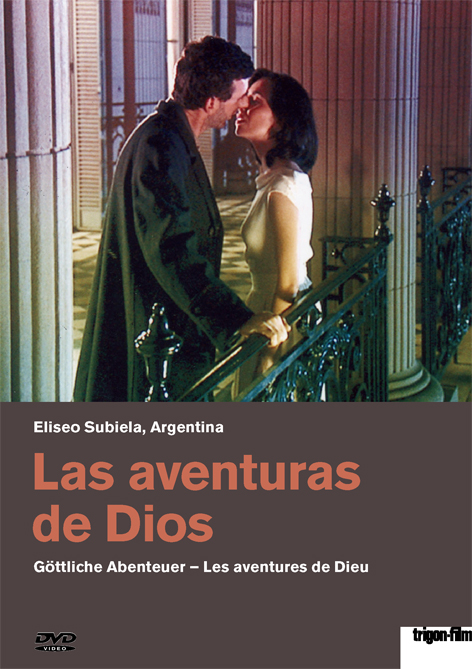 THE ADVENTURES OF GOD

A man and a woman are trapped in what seems to be a dream that unfolds in the maze-like corridors and mysterious rooms of a large seafront hotel from the thirties. In various ways, they will try to emerge from the dream. This is the reason for their investigations. They assume that someone among the many strange characters in the hotel could be the one that is dreaming them. This idea leads to the man killing all the suspects. The alleged dream soon turns into a nightmare. The protagonist is harassed by two men who accuse him of a crime that was committed somewhere else. Our hero remembers nothing of his past. He doesn’t even know how he came to the hotel. He has the feeling that at some point in his life he opened the wrong door, which led him to this bizarre place. God’s Adventures is a metaphysical thriller by acclaimed Argentinean director Eliseo Subiela (El Lado Oscuro Del Corazon, No Te Mueras Sin Decirme Adonde Vas, Pequenos Milagros). He describes the film as being the most atypic, provocative and disorienting of all his movies. Initially, Subiela perceived God’s Adventures as an exercise in automatic writing, in the surrealist tradition of Bunuel and Dali’s Un Chien Andalou. With the help of students from his film school and by shooting on digital video, he experienced an unprecedented liberty as a filmmaker and was able to complete a remarkable film that was deemed by the Agentinean film authorities to be impossible to make.