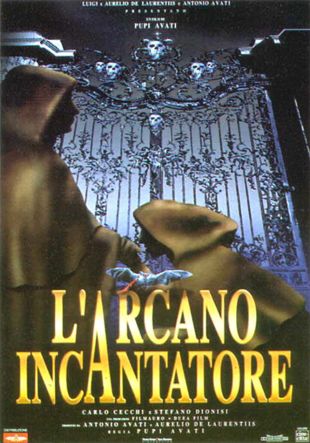 Bologna 1750. Giacomo, a novice in charge of the Archbishop’s archives, seduces a young girl and is forced to flee to escape harsh punishment by the Church authorities. To obtain a safe-conduct out of the city, he agrees to enter the service of a mysterious nobleman who lives in exile in a fortress in the mountains. The man, Achille Ropa Sanuti, is a former priest who had frequented a mystical society, shielded by the pseudonym of the Arcane Enchanter, which had led to his excommunication for experimenting in black magic. When Giacomo arrives, a strange relationship develops between him and the arcane Enchanter, who has continued his experiments in isolation. But there is nothing devilish about them at all – they simply aim to prove the power of telepathy. And in the end the novice makes a chilling discovery…
Pupi Avati’s sensational return to the fantasy genre, which has added some of the most unforgettable titles to his heterogeneous film career, has not exactly followed the most predictable of paths. Lying somewhere between esoteric adventure and precise historical recreation, the film tells the adventures of the novice Giacomo who flees into the mountains after a romantic episode.