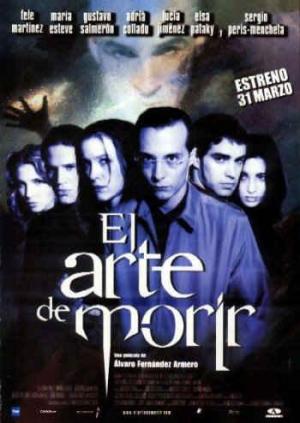 THE ART OF DYING

Four years ago Nacho, a young promising avantgarde artist, went missing. Neither his family nor his best friends could provide any clue as to his whereabouts or to the circumstances of his disappearance, but everything pointed to him being dead. Nacho was enormously talented. He had his own painting style, deeply influenced by the universe of Hieronymous Bosch and focused on a single theme : Death. Now, with the appearance of a significant clue, the police has reopened the case. Nacho’s friends are called to testify again. After having been questioned by the police, they come to a shattering conclusion. If the police discovers the body, they’re lost. They’ll have to dig it up. Nacho’s friends were all involved in his death, which happened one terrible night, of which no one ever speaks about and which no one has ever been able to forget. Four years later, they’ll have to face the past which has returned to haunt them and which starts to exact its own vengeance, as one after the other begins to die in strange circumstances. Fele Martinez, one of Spain’s leading young actors (Alejandro Amenabar’s Tesis and Abre Los Ojos, Julio Medem’s Los Amantes Del Circulo Polar) stars in this nerve shattering horror-thriller by director Alvaro Fernandez Armero (Todo es Mentira, Brujas, Nada en la Nevera). Luckily he gets help from the attractive Maria Esteve Flores (Mas Que Amor Frenesi, Cuarteto e la Habana) and from Gustavo Salmeron (La Ardilla Roja, 99.9, The Man With Rain In His Shoes)… as Nacho !