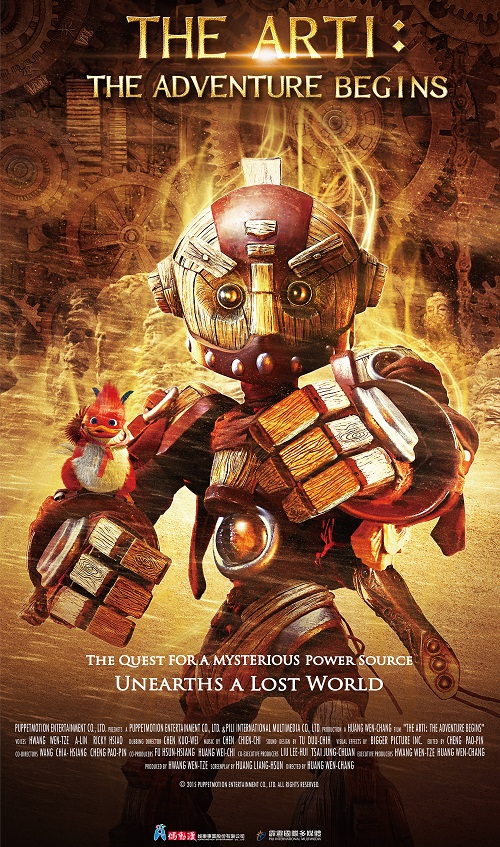 THE ARTI: THE ADVENTURE BEGINS – 3D

Sixteen years ago a genius built a wooden robot called Arti-C. His creation was driven by a mysterious energy source called The Origin. After scared farmers killed the maker, his children and Arti were forced to become nomads. Mo, the older brother, takes care of Arti and searches for information about The Origin. His younger sister Tong passes most of her time honing her martial arts skills. The next stop on their journey is the kingdom of Lou-lan along the Silk Road. But they have to watch out for sandworms that are attacking the villages on the road. Then Prins Angelo invites Mo and Arti-C to participate in a martial arts tournament. If they win, he’ll help them solve the mystery of The Origin. The key seems to be with the mysterious Lop people.

It’s not every day that you see a fantasy adventure movie with hand puppets. And there seems to be only one family in Taiwan that still makes these puppets and that can play with them. The craftsmanship is astonishing and the care and detail put into the beautiful sets gushes from the screen. The movie contains a lot of digital special effects, but a lot less than you might think, because it’s, of course, the puppets that steal the show, whirling around and fighting all the time in the best wuxia tradition. Director Huang Wen-Chang and his team have given us a very rare pearl, a unique mix of martial arts, steampunk, fantasy and puppets.