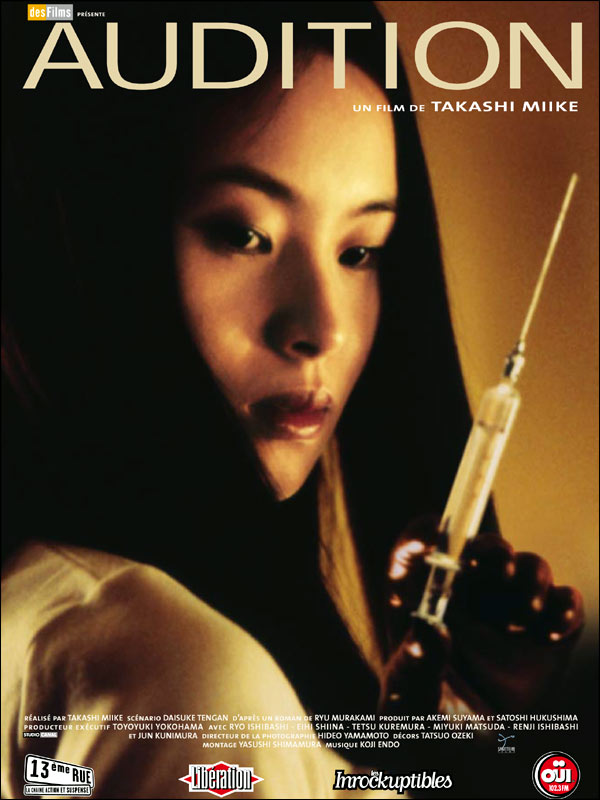 42-year old video-company executive Shigeharu Aoyama, who lost his wife seven years earlier, is urged by his teenage son to remarry to stop him from becoming lonely. A colleague reminds Aoyama of an abandoned feature-film project and suggests mounting auditions for the female lead, which will allow him to pick a potential bride. Only one candidate stands out, Asami, a 24-year old former ballerina who always dresses in white. Her seeming docility and politesse are precisely the qualities Aoyama craves in a woman. At first, he can’t believe his luck in finding this soft-voiced beauty, but her autobiographical stories never seem to check out. Then he sees the weird scars on her legs and starts hearing strange stories about people who disappeared from her life. The Audition is a truly shocking horror film about obsession gone evil. It’s made even more disturbing by its haunting beauty and its deliberate style. The central theme of the movie is the effect on women of Japanese male sexual attitudes, assumptions and actions. This latest outrage from Takashi Miike, director of the elegant Bird People of China, the blood-splattered Fudoh : The New Generation (presented at our 1997 edition) and also present at the Festival with City of Lost Souls, makes the young director a rival to “Beat” Takeshi Kitano.