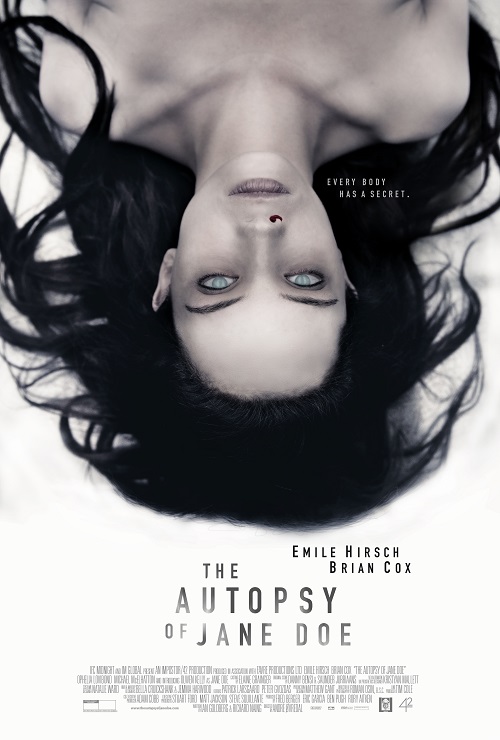 THE AUTOPSY OF JANE DOE

The police are investigating a particularly bloody crime scene. A family has been found slaughtered in their home. All signs indicate that they were trying to get away, but there’s no evidence of an intruder. Adding to the mystery is the discovery of the pristine body of a young woman half-buried in the cellar. With the entire media breathing down his back, the sheriff asks his local morticians to immediately perform an autopsy. The sardonic widower Tony is reluctantly assisted by his son Austin, who had to cancel a date to help his father with this rush job. Externally, the nameless and very attractive victim bears no visible wounds. She’s even curiously free of rigor mortis. But once they cut inward, they discover signs of extreme abuse that should have been shown on her body. Strange phenomena start to happen as soon as they begin cutting open the woman, as if some supernatural force has been unleashed. The first American film of Norwegian director Andre Ovredal (Troll-Hunter, BIFFF 2011) has proven itself to be one of the biggest crowdpleasers of 2016. It strikes the perfect balance between macabre humor and pure suspense. There’s plenty of grisly medical gore and great chemistry between Brian Cox (The Bourne Supremacy, Troy) and Emile Hirsch (Into The Wild, Killer Joe) as father and son morticians. And let’s not forget Olwen Catherine Kelly as the Jane Doe from the title. Her performance as a stiff is only surpassed by that one of Daniel Radcliffe in Swiss Army Man!