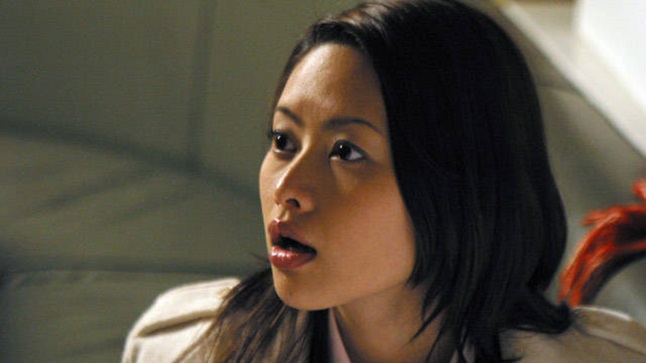 High-school student Hiroe moonlights as a prostitute. One day, she’s with one of her clients, Takezo, a complicated character with a thing for women’s makeup and hysterical fits. When things go wrong, Hiroe suddenly has a dead client on her hands. She rings up her girlfriends and they’re off to the woods to cheerfully dispose of the dead man. Everything seems to be under control, until Hiroe sees her own face plastered everywhere on prostitution adds. Then the phone rings. She picks it up and the nightmare begins; an endless hallucinatory ordeal haunted by her dead client. With her girlfriends at her side and any object that can hack, slice or amputate in her grasp, she prepares to face off against the pervert from beyond the grave.

The Big Slaughter Club is as well a horrific parody of the omnipresent Asian ghost movie as a pure cold-sweat chiller. That it might make you think of Takashi Miike’s Visitor Q is no coincidence. The film is directed by Hitoshi Ishikawa, screenwriter of Miike’s Dead or Alive : Final and its star, Kenichi Endo, was not only the father in Visitor Q but also appeared in Dead or Alive and Deadly Outlaw Rekka. The Big Slaughter Club is a very enjoyable demented spectacle with a monster that’s more disturbing than The Ring’s Sadako, more malevolent than The Grudge’s Toshio and busier than Freddy or Jason !