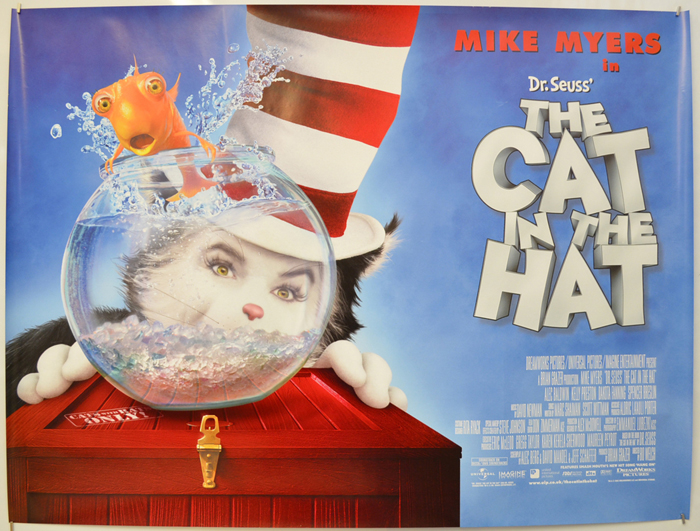 THE CAT IN THE HAT

A rainy afternoon in the idyllic town of Anville. All the houses are pink, the lawns are neatly groomed, and the shrubs look like plastic. Mom is on her way out for the afternoon, leaving her two children, control freak Sally and rules-breaker Conrad in the care of narcoleptic babysitter Mrs. Kwan. No sooner is she out the door and Mrs Kwan falls asleep. The fun begins with the unexpected arrival of the Cat in the Hat, a man-size feline with a penchant for mischief. It doesn’t take long for him to make a mess of the house before turning his attention to the outside world. Meanwhile, Mom’s seedy boyfriend Quinn watches all of this with an eye to turning circumstances to his own advantage.
After Ron Howard’s successful adaptation of The Grinch, starring Jim Carrey, The Cat in the Hat is the second book of the beloved American writer of children’s books, Dr. Seuss, to make it to the big screen. First-time director Bo Welch, the talented production designer for Tim Burton’s Beetlejuice, Edward Scissorhands and Batman Returns, has created a true feast for the eyes. And the hilarious performance of Mike Myers (Wayne’s World, Austin Powers), imprisoned beneath layers of makeup, as the cat, will entertain young and old alike.