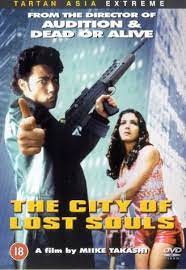 THE CITY OF LOST SOULS

Hotheaded Mario is a Japanese-Brazilian fighting to save his true love, Chinese hairdresser Kei. After he stages a daring helicopter and machine gun rescue to prevent her deportation, the two hide out in the back alleys of Shinjuku, Tokyo’s cultural and criminal melting pot. They plot for freedom under the protection of the ragtag Brazilian immigrant community. But they need money for passports and bribes in order to stow away on a ship promising freedom. Ambushing a deal between the Yakuza and Triads garners them a suitcase of cocaine rather than cash. Now they have a massive gang war on their hands, bringing bloodshed into their insulated, family-like neighbourhood, and their dream of escape turns into a twisted nightmare. In The City of Lost Souls, Japanese cult-director Takashi Miike (Midnight Madness, Fudoh : The New Generation, The Audition) offers us an ambitious descent into the underbelly of Tokyo’s criminal world. Once more, he explores the tension-filled realm of Japanese Yakuza and Chinese Triads, but this time he places a mismatched romantic couple in the midst of his darkly violent vision. Sneering at the guardians of good taste and political correctness, Miike orchestrates a symphony of excess with outrageous and bloody crescendos of S&Mobsessed gang lords, break dance duels, cockfights, Ping-Pong showdowns and toilet-bowl beating. Featuring a cross-cultural cast from all over the world, The City of Lost Souls is a delirious tale of love and violence set to a karaoke samba-beat love song.