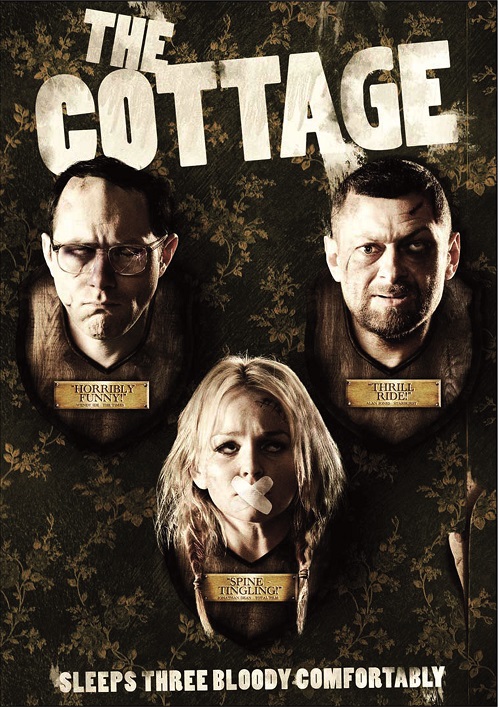 A cottage in the countryside serves as a hideout for two bungling kidnappers ; David, both the brains and brawn of the operation, and Peter, his wet blanket brother. Tied and gagged in the trunk outside is Tracey, a spunky youngster with a rich and worried father back home. Things go the wrong way pretty quickly when Tracey’s scheming step-brother Andrew turns up and sours the get-together, leading to a merry chase through the nearby woods. It’s an excursion which is destined to end in a bloodbath for some or all of those involved. Because deep in the woods is another cottage, home to a psychopathic maniac and his trusty pickaxe. The Cottage is about as far removed from Paul Andrew Williams’ debut feature, the harrowing and distressing drama From London to Brighton, as possible. It’s a relentless dark horror comedy with an extreme twist. Made in the best “Evil Dead” tradition, tongues are rammed firmly in cheek while metal is being rammed firmly in flesh. Laughs take first priority here, and the subsequent lashings of gore only add to the humour. Every sliced limb and broken bone only serves to ramp up the excitement. There’s an emphasis on character that is quite remarkable for the genre. Reece Shearsmith ( TV’s The League of Gentlemen, Shaun of the Death ) and Andy Serkis ( Lord of the Rings, King Kong ) are terrific as the kidnapping brothers and the delicious Jennifer Ellison ( The Phantom of the Opera ) is a real surprise as the far from helpless victim.Intern