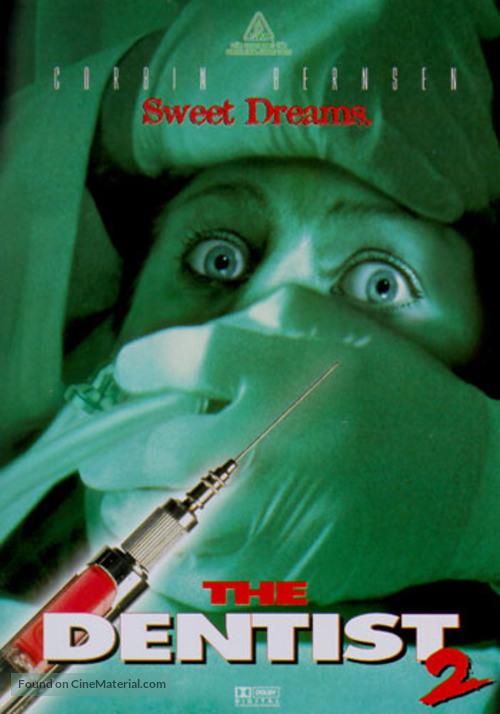 That dreaded trip to the dentist becomes a nightmare into the macabre when seen through the demented eyes of Dr. Alan Feinstone. For Feinstone, drills, needles, scalpels and forceps are instruments of sadistic pleasure best utilised to butcher, deform and kill his patients. Convicted of hideous crimes, the doctor was sentenced to spend the rest of his life in a mental hospital. But now Feinstone has escaped the high security institution, vowing never to return. With a new alias, Larry Caine, he relocates to the tiny farm town of Paradise, Missouri, where he aims to build a new life. Meeting the beautiful Jamie Devers, he finds himself falling in love. But it’s a relationship that threatens to unravel the terrifying truth about the doctor. Encouraged by Jamie to take on a temporary position as the community’s dentist, Feinstone wonders if his love for her will overpower his desire to kill. But within minutes of applying a scalpel on his first patient, he is transformed into his former deranged self. Snapping out of his uncontrollable rage, he discovers the brutalised remains of his patient. And the more patients the doctor sees, the more gruesome the murders become. But as Jamie’s friends start to become suspicious about the town’s new stranger, Feinstone must destroy them before they drill up his chilling past.
The original Dentist by genre veteran Brian Yuzna (Society, Return of the Living Dead III) toured the world-wide fantasy film festival circuit to rave reviews from fans of gory black comedy. This super-graphic follow-up is even more squirm-inducing than its predecessor. It plunges greedily into acts of oral mayhem that will hit a special nerve in anyone who has felt the frightening helplessness of the dentist’s chair. Returning in the title role, familiar television actor Corbin Bernsen (L.A. Law, The Cape) will undoubtedly surprise and stun those that are used to his more mainstream parts. While the original was a stabbing send-up of Los Angeles’ flaky New-Age medicine scene, The Dentist 2 attacks the charms of small town America. This film never loses sight of director Yuzna’s admirable intentions : “I want to make a film that will do to dentistry what Jaws did for water.”