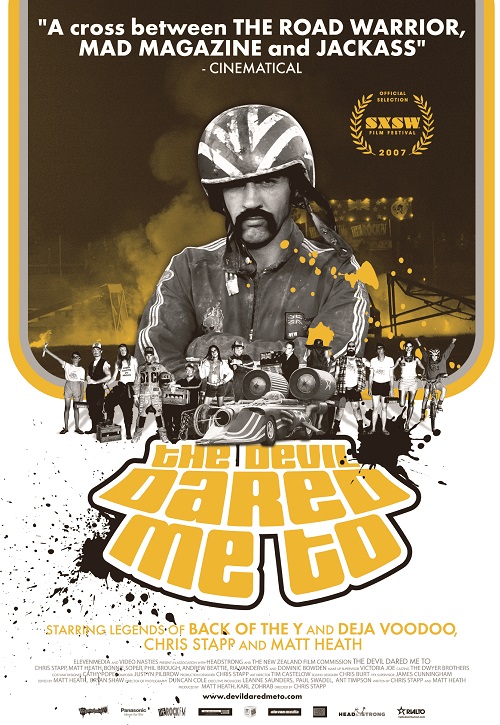 THE DEVIL DARED ME TO

Randy Cambell is a teenage orphan living with his aunt and uncle on a boring farm at the tip of the South Island of New Zealand. But he’s not destined to raise sheep, he has stunts in his blood. Four generations of Cambell men have died in horrific, fiery, daredevil deaths. Randy dreams of escaping his farming life, with a heroic 15 mile jump across the Cook strait. One day, a freak accident at the raceways sees Randy’s guardians violently killed by stunt legend Dick Johanson. Even worse, Tracy, the cute girl Randy just met, loses a leg. Randy has nowhere to go but on the road with Dick and his traveling misfit stunt-team, the Timaru Hellriders. Then, after years of cleaning Dick’s toilet, Randy finally sees his chance to make it as a stunt man. Mad Max meets Jackass in The Devil Dared Me To, a hilarious, anarchic and irreverent adventure of cars, stunts and rock ‘n roll. This little movie packs more laughs and chuckles than an entire legion of Hollywood comedies, not to forget all the death-defying action. Granted, most of the humor comes from horrible injuries, gruesome deformities and violently gross situations, but actor-director Chris Stapp does a great job of keeping his movie loud, raucous and adorably stupid. The Devil Dared Me To is extremely nutty Midnight movie madness fun.