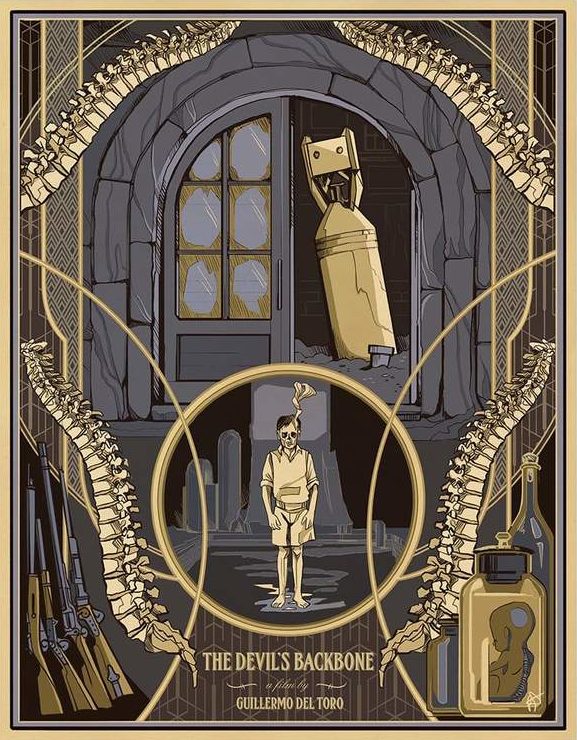 1936, Spain is being torn apart by the civil War. The grim orphanage of Santa Lucia stands alone on a desolate plain, its courtyard disfigured by a vast unexploded bomb. A place of decay and desperation, Santa Lucia is run by crippled headmistress Carmen and the mysterious Professor Casares. Twelve-year old newcomer Carlos is met with hostility and violence, both from the hate-filled handyman, Jacinto, and his fellow orphans. But for Carlos, the dark hallways and claustrophobic vaults of Santa Lucia hide far greater terrors. The emaciated ghost of Santi, a young boy brutally murdered on the night the bomb fell, appears to Carlos. At first, he begs to be set free from his torment. Then he warns of imminent disaster and implores Carlos to carry out a terrible vengeance. Guillermo del Toro, the Mexican director of the inventive and unsettling horror films Cronos (1992) and Mimic (1997), has realised a deeply personal gothic horror story. More than a mournful poltergeist fable, it’s also an allegory for the bloody Spanish Civil War that, according to Del Toro, still lingers unresolved like a ghost. Veterans actors Marisa Paredes (Life is Beautiful, All About My Mother) as Carmen and Federico Luppi (Cronos, Men With Guns) as Casares hold the screen mainly by personal presence. There’s also rising young star Eduardo Noriega (Open Your Eyes, Nobody Knows Anybody) as Jacinto and fresh-faced Fernando Tielve as Carlos. Del Toro succeeds in maintaining the eerie and unnerving mood, strengthened by cinematographer Guillermo Navarro’s use of sepia filters, until the unbearable end.