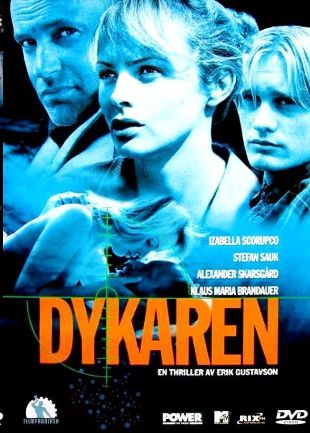 Former Polish secret policeman Orlov runs a caviar import company from Gothenburg, Sweden. But his business is a cover for all kinds of criminal activities. He sends his best men, the two Russian brothers Victor and Odessa, to steal a strictly guarded box from a warehouse in Gdansk, Poland. Only Orlov knows its valuable content. A fishing boat waiting outside the harbour will transport the loot back to Sweden. But his henchmen have different plans. Odessa convinces Victor to send his girlfriend, Irena, on the boat. When they sink the ship off the Swedish coast, it will look like an accident. Their boss will mourn the loss of Irena, whom he also cherishes, but he will not suspect Victor of having sacrificed his own woman to steal the box. As planned, the captain sinks the boat with the girl onboard. However, Irena gets rescued by Swedish fisherman Arne Nordbeck. These two people, both determined never to love again, are slowly drawn towards each other. Diver, by Norwegian director Erik Gustavson (The Telegraphist, Sophie’s World), is a character driven thriller about the struggle for power within Eastern European mafia gangs in Sweden. Polish bombshell Izabella Scorupco (With Fire And Sword, Goldeneye, Vertical Limit) plays Irena. Stefan Sauk (Vendetta) is Arne Nordbeck. Crime boss Orlov is a part by the outstanding Klaus Maria Brandauer (Mephisto, Never Say Never Again, Colonel Redl) and Tomas von Brömsen (My Life as a Dog, Sophie’s World) plays the corrupt captain.