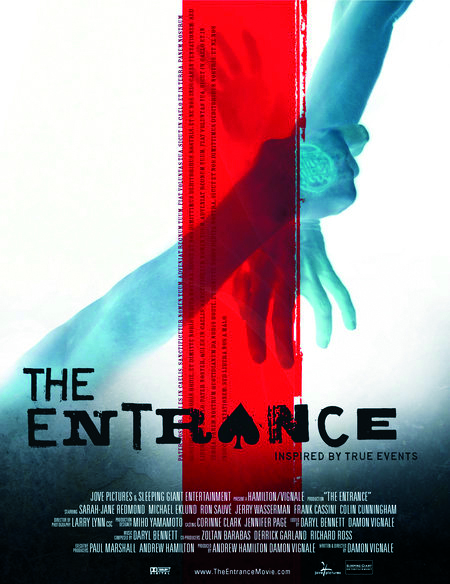 In the early 1600’s, renowned exorcist Father Sebastien Michaelis wrote about a possessed nun, Sister Madeleine, in Aix-en-Provence, France. The demon possessing Madeleine revealed itself as a fallen angel, a punisher of sinners and tempter of the innocent. Four hundred years later, Ryan James, a streetwise drug dealer, has escaped from the hands of his kidnappers. Desperate and shaken, he seeks help from the police. Jen Porhowski, a strong-willed and dedicated detective, sceptically tries to separate fact from fiction in Ryan’s account of the night’s horrifying events. As the two are drawn further into the case, a greater truth unravels, drawing attention to those writings from centuries ago. In an effort to save lives, Porhowski soon finds that the life at stake is her own. On the surface, The Entrance is a supernatural thriller about good versus evil, but beneath this, the harrowing second feature of Canadian writer-director Damon Vignale questions our basic notions of faith and morality. Is it true that no sin goes unpunished ? Can we ever escape our past, no matter what we have done with our lives ? And, most crucially, do demons exist apart from what we conjure up from our own subconscious minds ? The Entrance is unrelenting and psychologically more and more wrenching as it unfolds to its thought-provoking ending. Sarah-Jane Redmond (Tv’s Millennium and Smallville, The Invitation) is put through hell as detective Porhowski. Michael Eklund (House of the Dead, Dungeon Siege : In The Name of the King) lures her into a demonic trap as Ryan James.