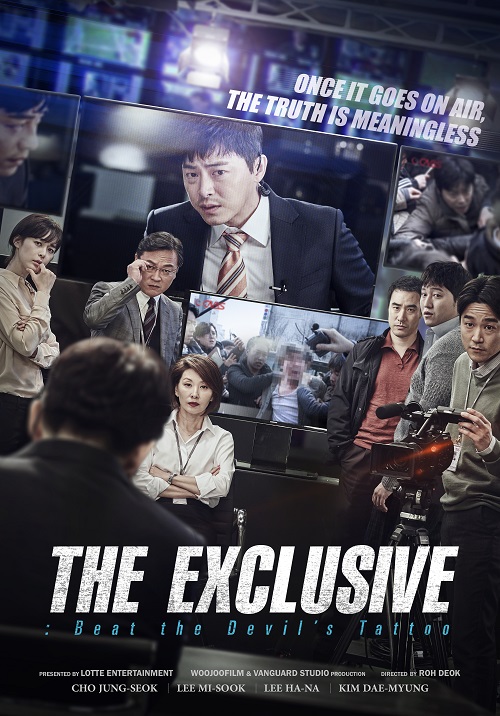 THE EXCLUSIVE: BEAT THE DEVIL’S TATTOO

When reporter Mu-hyuk screws up, he’s fired from the Tv-station where he works. That he’s also living apart from his wife and daughter, of whom he doesn’t want to divorce, is more than reason enough for a heavy drinking season. In his drunken stupor he decides to check a tip about a notorious serial killer… and hits the jackpot. Mu-hyuk discovers blood and intestines and even a murder manifesto in a basement flat. He decides not to go to the police and starts negotiating with the Tv-station. Exclusivity in return for hiring him back with a higher salary and a juicy promotion. When he also follows the killer in his car and streams it live on his smartphone, the sky seems to be the limit. And then the murderer turns out to be a theatre actor who uses fake blood and guts on stage, with the manifesto coming from a little known novel. Mu-hyuk gets entangled in a web of lies, as he has to keep spinning tales to keep his colleagues, the police and the media satisfied. But the real serial killer also wants his five minutes of fame!

Director Roh Deok worked for more than 12 years on her film, which is more related to the cynicism of Network than to the journalistic integrity of Spotlight. The Exclusive: Beat The Devil’s Tattoo mercilessly flails the obsession with scoops and exclusivity of the contemporary media where facts and the truth are just obstacles against higher ratings. This pitch-black satire with a bloody climax benefits from the acting talents of Seong-woo Bae, who seems to be very much present this year at the BIFFF, as we’ll also see him in The Phone and The Beauty Inside.