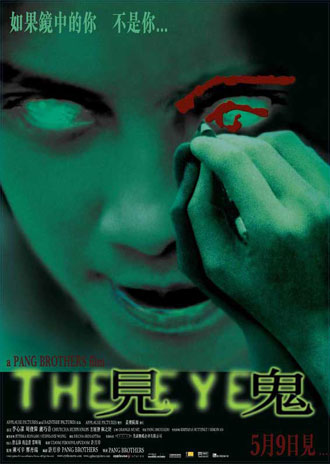 At the age of two, Mann went blind. Eighteen years later, a new and risky corneal transplant operation restores her vision. But a series of inexplicable events lead her to believe there is more than meets the eye to her new-found gift of sight. Mysterious black-clad figures seem to foreshadow sudden deaths and horribly disfigured denizens haunt her everyday existence. Unable to define her own identity, she comes to understand that whenever she looks into a mirror, she doesn‘t see herself. Instead, she sees another woman; the original owner of the corneas. Mann desperately embarks on a search to uncover the origin of her horrifying visions.

The Eye is an atmospheric blend of psychological thriller and eerie ghost story by director brothers Danny and Oxide Pang (Bangkok Dangerous). They firmly put the emphasis on spine-tingling suspense and an intriguing storyline, rather than gruesome special effects or blood-splattered excess. The Eye takes its time for the subtle sense of menace to get into top gear, with the most banal moments creating the most unease. The Pang Brothers slowly let the mystery deepen and intensify, until the spectacular ending, which will take the audience by surprise.