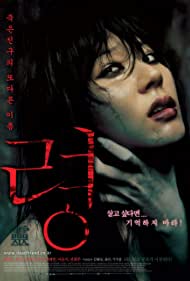 Ji-won is a bright young student with a promising future ahead of her. Her past is a different story. Something happened to her a while ago and left her with a blank memory. Ji-won has no recollection of who she is, who her friends were or what her life was before the incident. When Eun-seo, one of Ji-won’s old classmates, is found dead, drowned in her home, she begins to investigate her past. She’s desperate for any kind of information, but nobody will talk to her. Back in high school, Ji-won ran with a clique of bullies. One girl in particular, Su-in, was always at the wrong end of their torments. Desperately wanting to join the popular clique, Su-in did everything to please them. A year ago, she disappeared, never to be seen again. Ghost goes for the jugular right in the first scene with some very scary moments. Once debut-director Tae-kyung Kim has our attention, he makes Jiwon’s frustrated search for the truth the core of the film. But nothing will prepare her, or us, for the earth-shattering revelation, when the truth is exposed in the final scene. This is yet another solid Korean horror movie, with everything we’ve come to expect : great cinematography, a kick-ass soundtrack, with an ingenious sound design that’ll make the room come alive around you in the most unpleasant way.