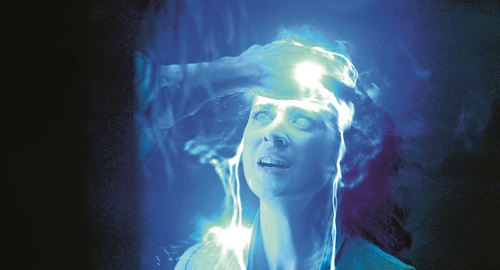 THE ISLAND OF LOST SOULS

14-year old Lulu has just moved from the big city to a sleepy seaside village. With her single mother working night shifts and only her bratty younger brother Sylvester for company, Lulu longs for excitement. Then, one night, Sylvester is struck by a beam of white light. His odd behavior reveals that he has become possessed by the spirit of Herman Hartmann, a 19th Century member of a secret lodge that fought against evil and corruption. Soon, the voices of lost souls trapped on nearby Monk’s Island begin calling for help and Lulu is eager to investigate. Together with Oliver, a phobic, painfully insecure rich kid, and Richard, a disillusioned scientist and researcher of the paranormal, Lulu goes to Monk’s Island. They discover a destructive force that is using the spirits of the past for nefarious purposes. Boasting amazing special effects and a gripping story that spans three centuries, Island of Lost Souls is one of the most spectacular fantastic films ever made in Europe and gives Harry Potter a run for its money. Director Nikolaj Arcel, best known for his Danish box office success King’s Game, draws great performances from his cast and utilizes the full power of computer-generated imagery ( watch out for the evil scarecrow ) to create nail-biting suspense and magic.