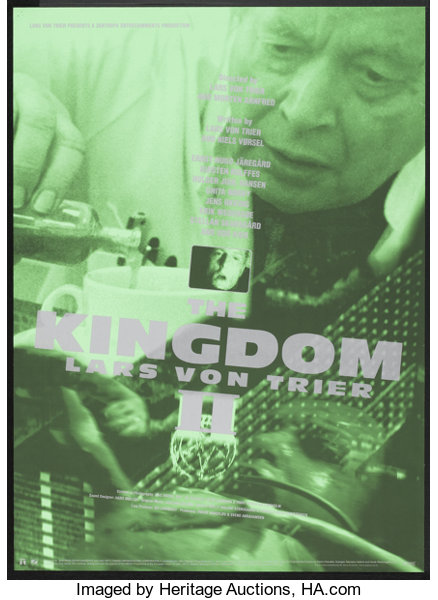 The prestigious Kingdom hospital and its motley crew of staff and patients are back to give us more thrills. In a splendid mixture of unalloyed horror and unadulterated soap we watched the way Mrs Drusse tried to put an end to little Mary’s torments, aided and abetted by her son Hansen. How Stig Helmer, the Swedish brain surgeon, tussled with the Mona report and how Professor Moesgaard messed with his entire department. Slightly extended collection of characters and spine-chilling events in this sequel.
In The Kingdom 2, ruthless wit, acid social comment, and pungent portraiture of hospital staff and patients. From Danophobe Swedish chief neuro-surgeon Helmer and his alternately sex-crazed and gambling-obsessed staffers to hypochondriac patient Mrs Drusse who happens to be in touch with the ghosts of former patients with a score to settle. They’re back in force. And so is the baby whose raging birth terminated part 1.
Audiences world-wide were enthralled by Lars von Trier’s stylistically daring, thematically challenging auteur pot au feu of modern medical science versus the forces of the occult in a supposedly state-of-the-art hospital, where wheeling and voodoo dealing get the upper hand of healing.