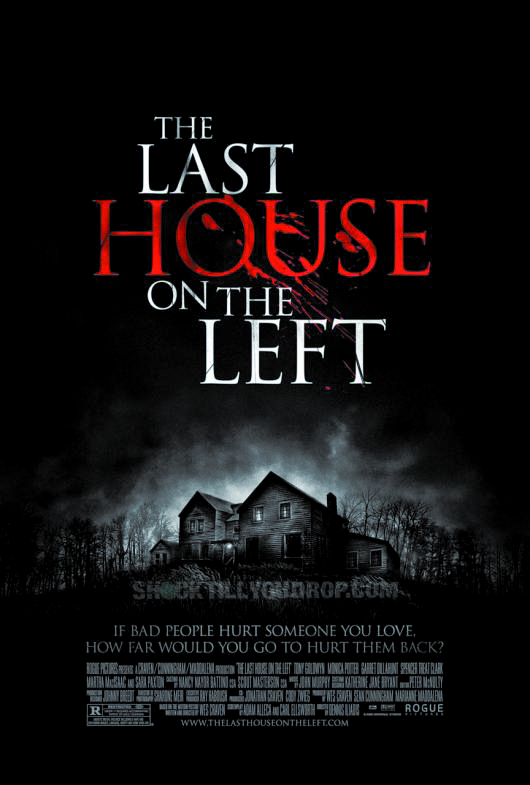 THE LAST HOUSE ON THE LEFT

Shortly after arriving at her family’s secluded lake house, Mari Collingwood and her best friend are abducted by a sadistic prison escapee and his violent crew. Left for dead and nearly in shock after suffering unspeakable abuse at the hands of her captors, Mari realizes that her only hope for survival is to find her way back home. Unfortunately for Mari, her attackers have unwittingly arrived at her parents’ home seeking shelter from the authorities. There, Mari’s concerned parents, John and Emma, realize to their horror just what grim fate has befallen their beloved daughter. Suppressing their rage in order to lure the killers into a deadly trap, John and Emma quietly hatch a plan to make the three strangers suffer for their grisly transgressions. Masters of horror Wes Craven ( The Hills Have Eyes, Nightmare on Elm Street, Scream ) and Sean Cunningham ( Friday The 13th ) revisit their landmark film, the controversial 1972 shocker ( itself a remake of Ingmar Bergman’s The Virgin Spring ), that launched Craven’s directing career and influenced decades of horror films to follow. Bringing one of the most notorious thrillers of all time to a new generation, they are the producers behind this story that explores how far two ordinary people will go to exact vengeance on the sociopaths who harmed their child. Greek director Dennis Iliadis debuted with Hardcore, a gripping drama about two girls forced into prostitution. He seems to have been the perfect choice for the update of this horror classic about rape and revenge.