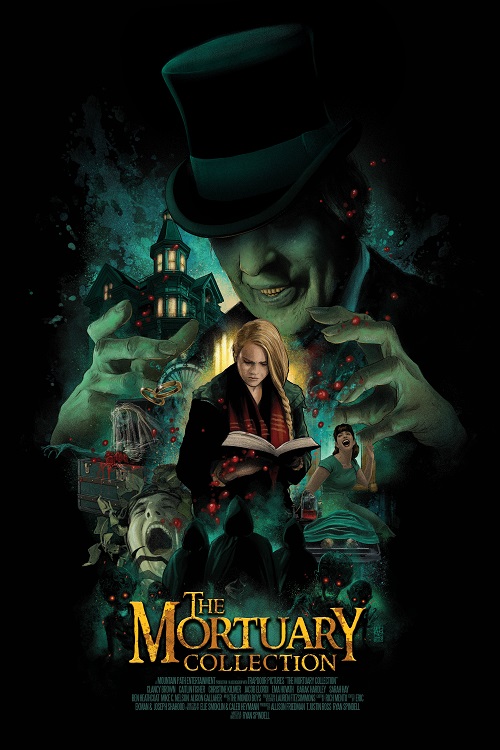 What if the Tall Man, the evil undertaker from PHANTASM, enjoying his twilight years in 2020, took in an ironic millennial to help him out in his rundown mortuary? That’s exactly what Ryan Spindell wants to find out too! Montgomery Dark, a 7-feet tall, seemingly decade-old creepoid goes about his daily chores at Raven End’s Mortuary: tending to the dead, scaring away little kids, relishing in old school horror stories. Old school, like everything about Mr. Dark: his speech, manner, clothes, mansion, the music that plays in the background – yes, even the grainy film images, everything suggests the glory days of 70’s and 80’s. But Sam, his new apprentice who wasn’t even born when his favorite horror flicks were released, is going to burst his bubble. Monty tries to spook her with a couple of tales from the crypt: stories with Lovecraftian tentacles, or highly unusual – and graphic! – pregnancies, or love beyond the tomb… But all he gets are jaded reactions: “It’s not bad”, “I was expecting something a bit more substantial, maybe an ironic come-uppance or a big twist”, “a bit predictable”… Yup, she’s pretty much like the BIFFF audience! Spindell’s brilliant 2015 short THE BABYSITTER MURDERS was the starting point for this one-of-a-kind anthology that has those vintage thrills of say, EC Comics and CREEPSHOW but with a modern-day ironic wink. It’s gorgeous to look at and Clancy Brown was born to play the gravely funny mortician Dark.