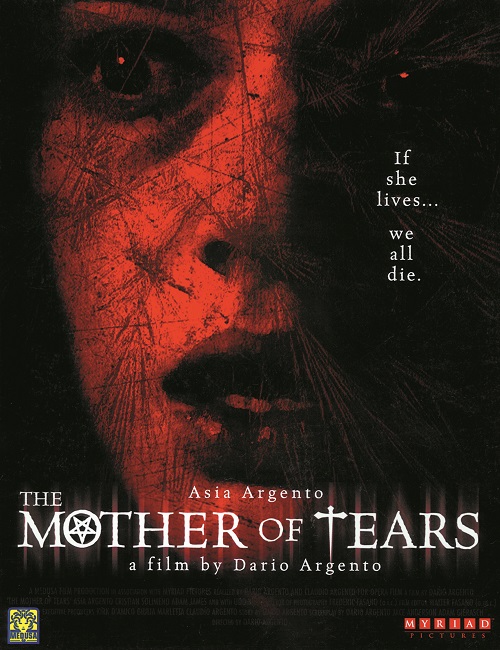 THE MOTHER OF TEARS

An urn discovered in a grave is turned over to the Rome museum, where Sarah Mandy is studying art restoration. And so is the dark cabbalistic prophecy of the Second Age of Witches set into motion. With the seal of the urn broken, the powers of Mater Lachrymarum, the Mother of Tears, the cruellest and most beautiful of the fabled witches known as the Three Mothers, are restored. Soon, Sarah’s colleague meets a gory death at the hands of demons unleashed from the urn, and havoc explodes in the streets of Rome as a wave of suicide and violent crime heralds the dark priestess’s rebirth. Pursued by the witches who descend upon the city to pay homage to their queen, Sarah is aided by the ghost of her mother, a white witch. As Rome burns, the key to breaking the supernatural chaos presents itself in the form of a powerful book. A screeching monkey chases damsel in distress Asia Argento. Crazed supermodel witches perform the dance of death in a cursed mansion. Exorcist Udo Kier is overwhelmed by an outbreak of madness. Welcome to The Mother of Tears, Dario Argento’s finale to his Three Mothers trilogy that started with Suspiria and Inferno. A testament to Argento’s heritage of horror, the movie reunites many of his past collaborators including his actress daughter Asia and her mother Daria Nicolodi, special-effects wizard Sergio Stivaletti and composer Claudio Simonetti. References to the previous instalments circle through the richly atmospheric plot, complete with bizarre turns of nightmare logic and sexual frenzy, plenty of gore and grisly baroque set pieces. The Mother of Tears is further proof that Dario Argento is an alchemist who doesn’t hesitate to throw the audience into his surreal, phantasmagorical world.