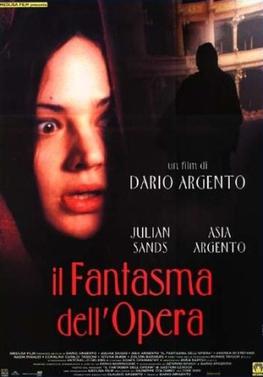 THE PHANTOM OF THE OPERA by Dario Argento

A new-born baby boy lies in a woven basket floating on the murky, eddying waters of a subterranean river. He is rescued by a pair of rats… “And so, by fortuitous circumstances, a mysterious bond has just been formed between the abandoned child and the inhabitants of the Shadows” (Gaston Leroux) Paris 1877. The Grand Opera House. Several workman are suddenly devoured, swallowed up, killed by a mysterious force. On the stage of the deserted theatre, the young soprano Christine Daaé is rehearsing a scene. The Phantom, of handsome and noble bearing, is utterly enchanted by her talent and her beauty. Although she is attracted by the elegant courtship paid to her by the Vicomte Raoul De Chagny, Christine is intrigued by the attentions the Phantom lavishes on her. Meanwhile, the Opera is struck by a series of mysterious accidents, another person is found murdered in the theatre’s sinister subterranean vaults.
Ever since his first film, L’uccello dalle piume di cristallo in 1970, Dario Argento started to invent new rules for thrillers, carrying this genre to extremes of astonishment. The author of cult films like Profondo Rosso and Phenomena is a source of inspiration for famous directors as John Carpenter, George Romero and John Landis. In The Phantom of the Opera he directs his daughter Asia as the beautiful soprano Christine. Julian Sands stars as the Phantom, determined to launch Christine as Paris’s greatest soprano.