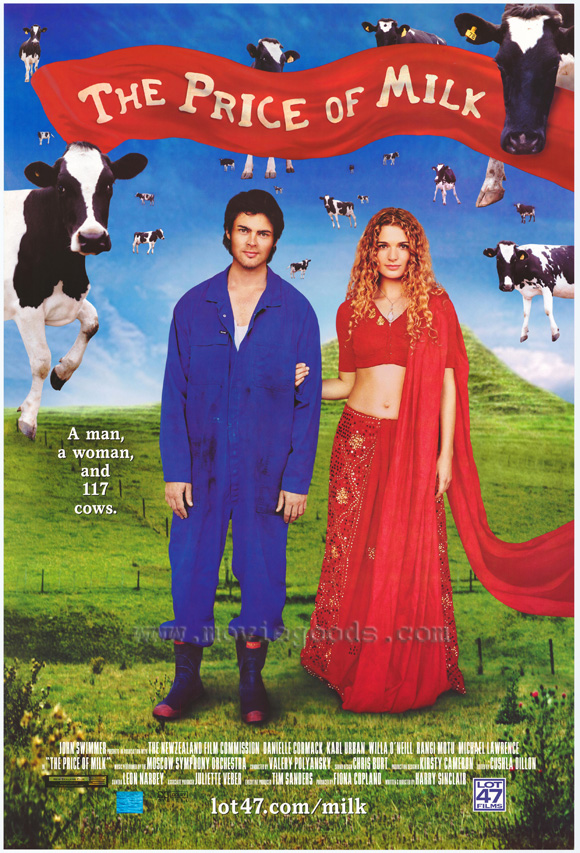 THE PRICE OF MILK

Lucinda and Rob live happily on a New Zealand dairy farm with their 117 cows. One day while driving, Lucinda accidentally hits an old Maori woman. Luckily, the old lady is not hurt. But the next day, when Lucinda awakes, she realizes that her favourite blanket has disappeared. It turns out that the old Maori woman took the blanket. To get it back, Lucinda gives away Rob’s beloved cattle. When he discovers this, he angrily leaves her. To retrieve Rob’s cattle, Lucinda must give away something that is most dear to her heart; her love for Rob. New Zealand director Harry’s Sinclair’s second film is quite different from his awarded debut Topless Women Talk About Their Lives. While the first dealt with modern life in the city, the second is an eccentric fairy tale set against magnificent rural landscapes. Sinclair’s delightfully twisted take on the chaotic nature of human relationships contrasts beautifully with the idyllic landscape. It’s a clever comedy about the inner turmoil of a woman racked by insecurities about the fragility of her own particular paradise. With a lush, romantic score by the Moscow symphony orchestra and two sexy, engaging leads, Danielle Cormack (Topless Women Talk About Their Lives, Siam Sunset) as Lucinda and Karl Urban (The Irrefutable Truth About Demons, Lord of the Rings) as Rob, The Price of Milk is an enchanting movie that will warm the hearts of romantics.