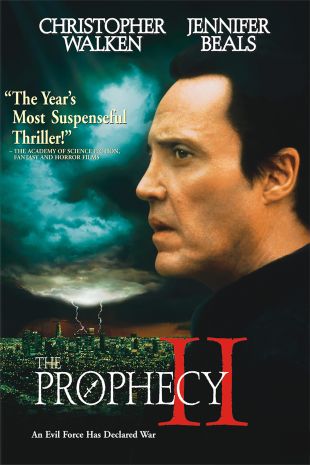 The war for Heaven is far from over. Gabriel, the most powerful of God’s angels, has returned to earth with an attitude and an army of angels gone bad. His mission: to destroy God’s most treasured creation : mankind. Gabriel wants to prevent the birth of a child conceived by one of his kind, the angel Daniel, and one of God’s “monkeys”, the human woman Valerie. According to a prophecy, this baby will reconcile the angels and bring peace in Heaven. Gabriel employs the assistance of a teenage girl, Izzy, who has just committed suicide. He keeps her alive to assist him in his war against Daniel and the other angels, a war that will climax with a battle in Eden.
In 1995, God’s Army opened the festival. This movie by Gregory Widen, the creator of Highlander, enchanted us by its theme : a war among angels for the soul of mankind. Director Greg Spence (Children of the Corn : The Gathering) has further elaborated this theme and has injected it with some black humour. Christopher Walken (The Deer Hunter, King of New York, The Funeral) shows his most frightening side as the Archangel Gabriel. Jennifer Beals (Flashdance, In the Soup, Four Rooms) carries the fate of humanity in her womb as Valerie Rosales. Russell Wong (New Jack City, The Joy Luck Club) is the good angel Daniel and Brittany Murphy (Clueless, Drive, Freeway) as Izzy has to help Gabriel in destroying her own kind.