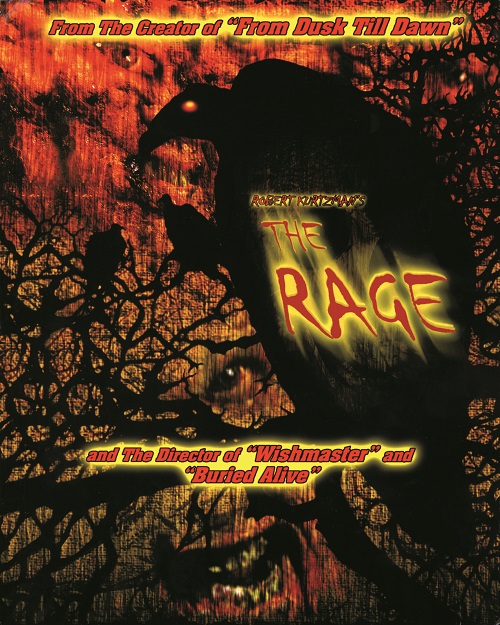 Russian scientist Viktor Vasilienko has discovered a cure for cancer but, because his country switched from communist to capitalist, all his research is destroyed and he’s labelled a madman, as it’s more profitable for big pharma if people stay sick. When he’s released, he swears to have his revenge on mankind, especially the bloated, capitalist pigs of the US. He develops a virus that’s pure, unadulterated rage and wants to release it in the open. Vasilienko will provide the cure when his original research is returned to him. But things don’t go quite according to plan. One of his final experiments breaks out of the doctor’s ramshackle abode in the middle of nowhere and eventually curls up and dies, only to be feasted on by vultures. The virus mutates and the birds turn into monstrous harpies, attacking and infecting anything that moves. Let the carnage begin. With horror being so deadly serious these days, The Rage feels like a triumphant and outrageous return to the splatter fun of the 80ties. From the very first images, the gore is soaking up the screen. Heads are torn off, geysers of blood are shot, limbs are ripped apart and fly all over the place. The Rage is a labour of love from director, producer and special effects legend Robert Kurtzman ( Predator, Wishmaster, From Dusk Till Dawn ). He’s crafted a fun, old school B-movie with all the right elements and enthusiastic performances from genre veterans such as Andrew Divoff ( Another 48 Hours, Air Force One, Wishmaster ) as the mad scientist and Reggie Bannister ( Phantasm, Bubba Ho-Tep ), one of the numerous victims of The Rage.